Getting Ready for a Quantum Future

Quantum computing no longer belongs to the realm of science fiction. It’s advancing to more practical, demonstrated applications and concepts. And while it’s still developing, it has present-day implications for health care.

What is Quantum Computing?

Quantum computing utilizes quantum mechanics to process information. Conventional computers operate with bits: binary pieces of information encoded as either a “one” or a “zero.”

Quantum computers encode bits of information in quantum systems known as “qubits.” One of the fascinating aspects of qubits is their ability to embody multiple states simultaneously — this is called “superposition.” Thus, a qubit is not constrained to encoding just a “one” or a “zero” but can embody a wide range of combinations of “one” and “zero”. For example, hydrogen nuclei can be oriented “up” (encoding a “one”) or “down” (encoding a “zero”) as well as a spectrum of orientations in between.

The rich complexity intrinsic to these quantum states enables computations that would be infeasible to achieve with conventional computers, bringing certain previously impossible tasks into reach. Advancements in the areas of drug design, in silico trials (virtually testing new medications and medical devices) and in sequencing and analyzing DNA at unprecedented speed are some examples of the potential benefits of quantum computing.

While there are many exciting future applications for this kind of computational capability, it also has repercussions for existing encryption and data security standards. To date, the Canadian health system has been diligent on specifications related to data residency, securing data at rest, and encrypting data in transit.

Planning for the Future

Quantum computing offers considerable potential for health care. But to optimize its benefits, we need to prepare. There are several potential approaches under consideration to protect patient data. These include implementing new quantum safe algorithms for encryption and, alternatively, more highly secure quantum key distribution mechanisms for managing network communication.

Approaches to address these challenges are in the early stages of being developed and Canada has the opportunity to lead the way in building a quantum safe health care environment. Now is the time to understand, invest in and plan for a quantum future.

Brad Keates is a Senior Director on Infoway’s Innovative Technologies team. In this role, Brad is responsible for identifying forward looking innovative technologies that will make a positive impact to health outcomes for all Canadians. Previously at Infoway, he led identity management projects, as well as software design and development initiatives. Prior to Infoway, Brad held global general management roles in the information technology sector, leading sales, consulting and professional services organizations. 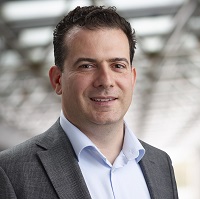 Dr. Michele Mosca is co-founder and CEO of the quantum-safe cybersecurity company, evolutionQ, and co-founder of the quantum software and applications company, softwareQ. He serves as co-chair of the board of Quantum Industry Canada. He co-founded the Institute for Quantum Computing at the University of Waterloo and is a founding member of Waterloo's Perimeter Institute for Theoretical Physics. He co-founded the not-for-profit Quantum-Safe Canada, and the ETSI-IQC workshop series in quantum-safe cryptography and is globally recognized for his drive to help academia, industry and government prepare our cyber systems to be safe in an era with quantum computers.