Beyond the Binary: Sex and Gender Information in EHRs

It’s unsettling, going unseen. Several years ago, I sat in an exam room with Kleenex scrunched in my fist. The clinician had just suggested a common procedure — except it wouldn’t be routine for me. Quite the opposite. As she did her best to offer assurance, I felt the realization slowly build. You don’t understand why I’m upset. 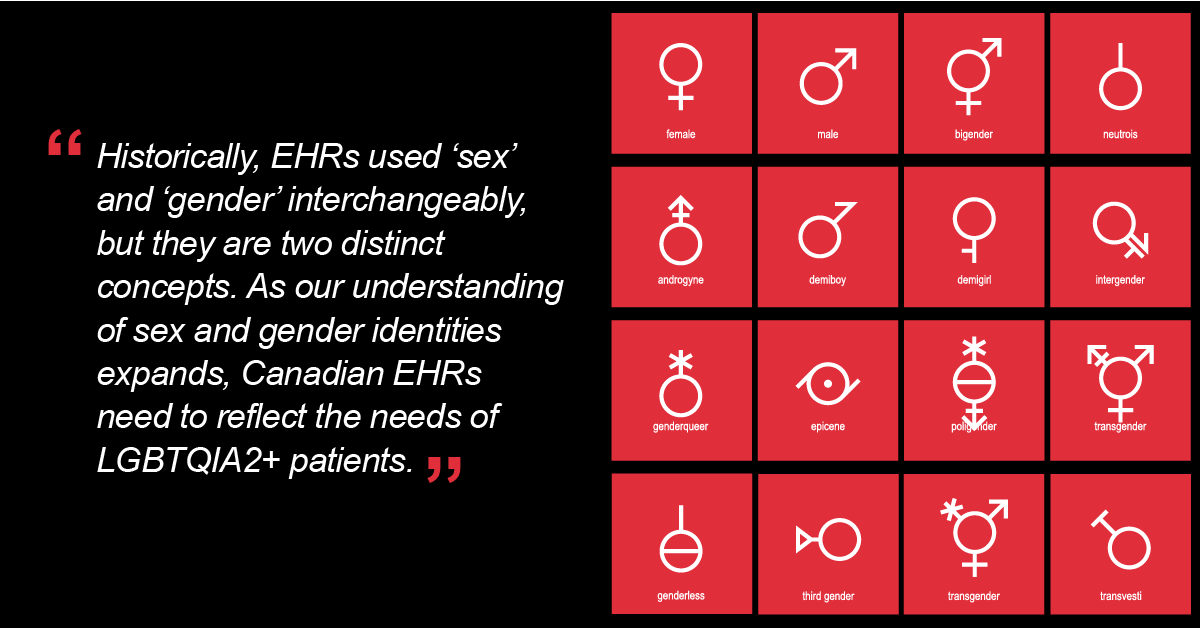 Like thousands of Canadians, I identify under the LBGTQIA2+ umbrella. This clinician and I had discussed it before. As a patient, I felt supported in my self-disclosure. In the past, I’d been pleasantly surprised by the clinic’s knowledge.

But here was a dropped ball. To be clear, this wasn’t malice, or prejudice, or discrimination. It was just a lack of insight into how my identity intersected with the specifics of this visit.

While the incident hurt, I carry considerable privilege in my encounters with the health system. Among other things, I’m a cisgender woman: my gender identity matches my sex assigned at birth. But for many people, correctly recording their sex and gender data isn’t as simple as entering “M” or “F.”

Historically, EHRs have used “sex” and “gender” interchangeably, but they are distinct (and nonbinary) concepts:

Sex and gender combine in various ways as part of a person’s identity. When they match, a person is cisgender. When they do not, a person is transgender. It’s important to note that gender identity and gender expression are also distinct attributes; a person may present as one gender while identifying as another.

Depending on the clinical setting, different information may be needed. Incorrectly recorded sex can lead to mislabelled samples and lost test results, lack of referrals and screenings (or inappropriate ones), and incorrect dose calculations and reference labels.

Incorrect gender data can also lead to negative health outcomes. Deadnaming (referring to the name a person used before transition) and misgendering (using incorrect pronouns and/or incorrect gendered terms) can be wounding, stigmatizing experiences that may lead to patients avoiding care. In addition, incorrect or inconsistent gender data may force a “continual coming out” as patients move through the health system. This process can cause significant stress — even if a patient feels safe enough to self-disclose in the first place.

So what can be done? The Sex and Gender Working group on InfoCentral is bringing Canadians together to help modernize Canada’s sex and gender information practices in digital health. The scope of this work includes:

In addition to modernizing information practices, broader education is needed. As I learned in that exam room, it isn’t enough for clinicians to acquire knowledge. Attitudes must change as well. At heart, modernized sex and gender information practices are patient-centered care: care that respects and responds to all the parts of a patient’s individual identity, needs and values.

When Pride Month ends and the rainbows flags are folded away, LGBTQIA2+ Canadians still need a health care system that sees them. We are here, we are queer, and we need sex and gender data that is clear.

Interested in continuing the discussion? Learn more and take part in the Sex and Gender Working Group stakeholder consultation sessions to share your feedback about sex and gender related issues in EHR systems.